When people think about mehndi, they automatically think of Indian weddings. Mehndi designs and mehndi captions for Instagram are a big deal during weddings, and there's even a full festival dedicated to it called Mehndi Rasam. One of the most exciting events is the Mehndi ceremony. 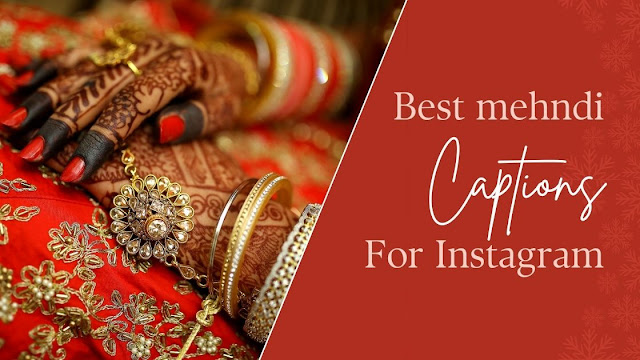 It is frequently more than just a matter of style. The brighter the bride's mehndi, the happier she would be in her marriage, it is said. But why should mehndi be limited to weddings? Mehndi is a must-have for any Indian wedding, house festivity, or just casual doodling on your hand. Show off your mehndi on social media with these fun captions we've put down for you.

Mehndi is not just a ceremony in India its an emotion so to express those emotions we have collected some great and awesome bridal mehndi captions for Instagram. These Mehendi captions are truly unique and latest which you can use for free anytime.

No bride has ever stated, "I have enough mehndi!"

I replied yes when he asked.

Her mehndi will be so beautiful... so profound... so captivating... so memorable because of the love we have.

The color of your mehndi would not be as dark if my love for you wasn't as genuine.

The deeper the henna, the higher the love parameter.

I enjoy being the inspiration for your bridal mehndi

Her mehndi said, "Soon to be Mrs."

The color of the mehndi might reveal the depth of love.

The bride's genuine beauty resides in the henna in her hands.

There's a lot to look at, but all you can see is her mehndi.

There are a lot of people in the room, but they're all staring at her mehndi.

While the bride's wedding gown is essential, her mehndi expresses her personality, style, and future plans.

Bridal mehndi designs and bridal mehndi captions are frequently used as a love test. If the mehndi is black, it is said that the partner loves you passionately. Women will do anything they can to acquire a dark henna color on their hands, from sprinkling olive oil to squeezing lemons.

This section is for you if you want to justify your relationship with the color of your mehndi or if you have someone particular in mind when you apply mehndi.

I put mehndi on my hand every now and then, right in the thick of my daily existence.

My Mehndi is far superior to yours.

Mehndi and a good book.

I'm here for the mehndi party, so please excuse me.

Keep your cool and apply your henna.

So, where has the mehndi artist vanished to?

Find someone who looks at you in the same way as I look at my mehndi.

Mehndi drew me in.

I'm wearing mehndi and wandering about the home.

It's time for the mehndi party, and someone please pass the henna to me.

When mehndi is applied to the hands, life takes on a new hue.

There are some things you just can't express in words, so henna it.

It's truly a blessing to have someone who can handle your mehndi craziness.

Finding the initial of my name in between the patterns of her henna was my sole love game.

Relationships are painful, but losing someone who doesn't appreciate your mehndi is a win.

Please, can attending mehndi ceremonies be considered a profession?

Looking at henna with a dark stain is a source of joy.

This section is for you if you're at a party mehndi and want to publish images of your mehndi on social media platforms after sitting awkwardly for hours.

When mehndi is applied to the hands, life takes on a new hue.

And thus the journey begins...

The bride-to-be will have an amazing Mehndi party

For the big day, we're all getting henna-ed up.

I couldn't be happier for you and the wonderful path that lies ahead.

There are some things you just can't express in words, so henna it.

I'm here for the mehndi party, so please excuse me.

It's time for the mehndi party, and someone please pass the henna to me.

I'm only coming for the mehndi.

So, where has the mehndi artist vanished to?

I received a mehndi for the first time.

Keep your cool and apply your henna.

The best combination ever is mehndi and dancing.

Please, can attending mehndi ceremonies be considered a profession?

There are many reasons to be happy, and one of them is the gorgeous dark mark left by henna.

Looking at henna with a dark stain is a source of joy.

My Mehndi is far superior to yours.

I put mehndi on my hand every now and then, right in the thick of my daily existence.

Mehndi drew me in.

I'm wearing mehndi and wandering about the home.

It's mehndi time, so don't bother.

Where are you, Team Mehndi?

Love is mehndi, and love is dark.

The quarantine mehndi is looking fantastic.

The best combination ever is quarantine and mehndi.

Mehndi and a good book.

I'd sooner apply mehndi than prepare a meal.

This was forced upon me by Quarantine.

Bridal mehndi, on the other hand, have historically incorporated designs from Vedic Indian mehndi. Nowadays, brides are inspired to adorn their hands and feet with Indo-Arabic and Arabic motifs. Animals, nature elements, Hindu gods, and even the groom's name can be found buried beneath figures in mehndi designs and beautiful mehndi captions.

She drew flowers with mehndi in her hand and held them elegantly.

April showers usher in May blossoms.

Daisy, you've made a mistake.

Flowers don't only tell; they demonstrate.

This love is in full bloom.

I'd henna you if you were a flower because roses are red and violets are blue.

Flowers, after women, are the most divine creations

Live life to the fullest with wildflowers in your hands.

Henna is required for the growth of all flowers.

Flowers are a must for me.

Allow your delight to bloom like flowers in the springtime. 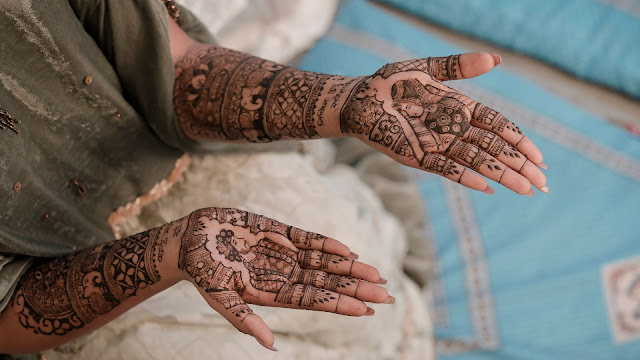 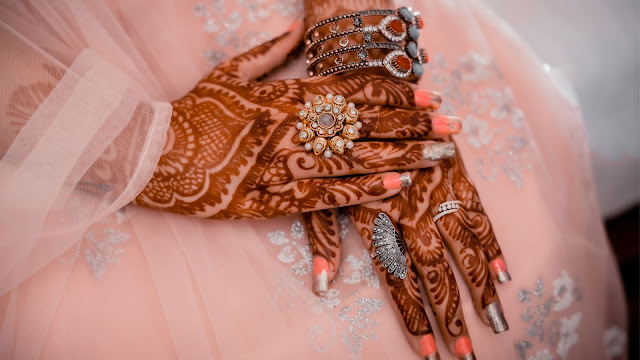 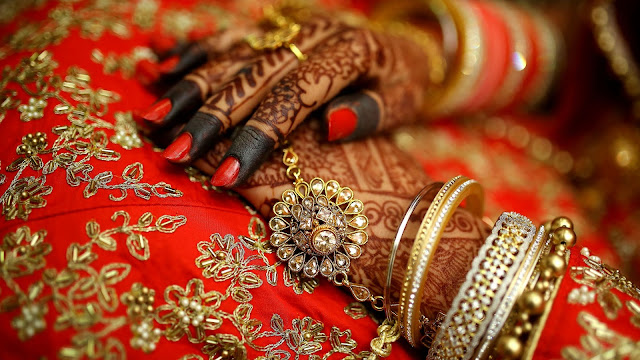 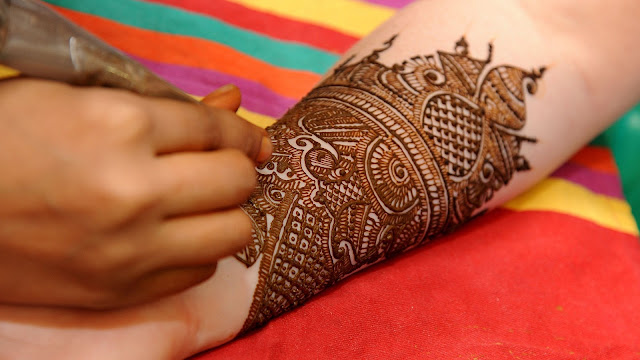 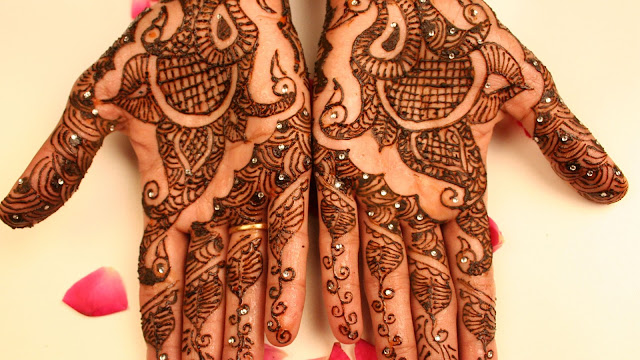 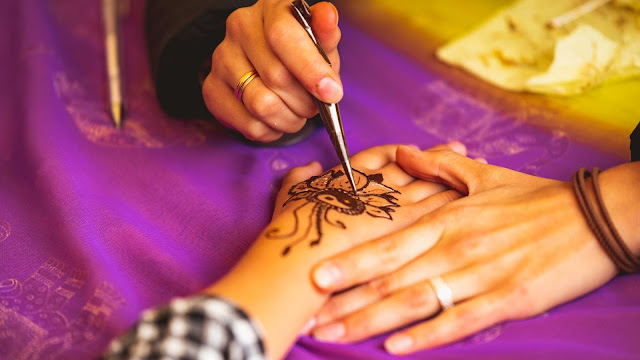 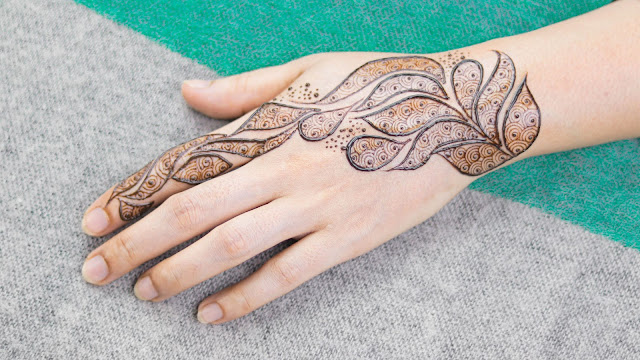 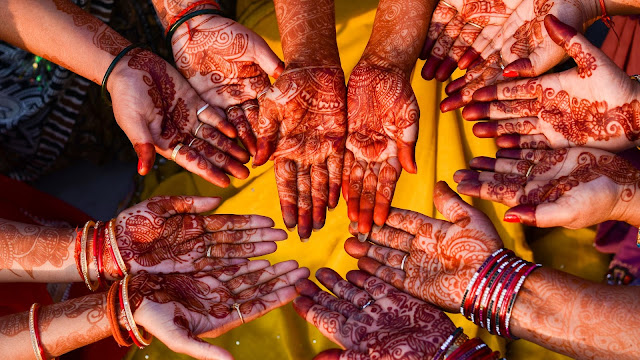 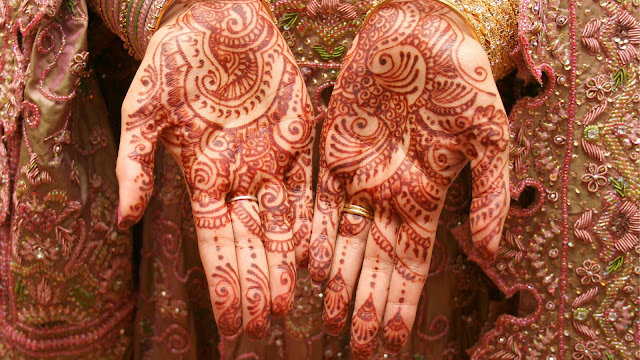 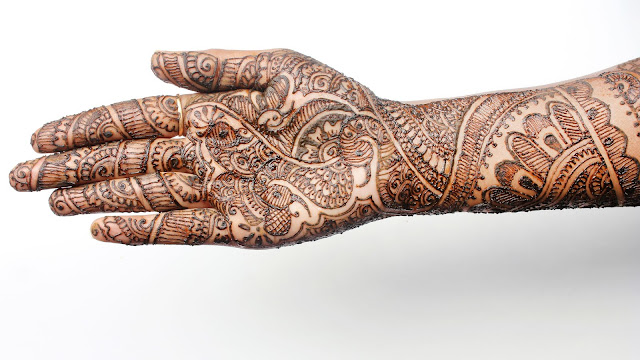 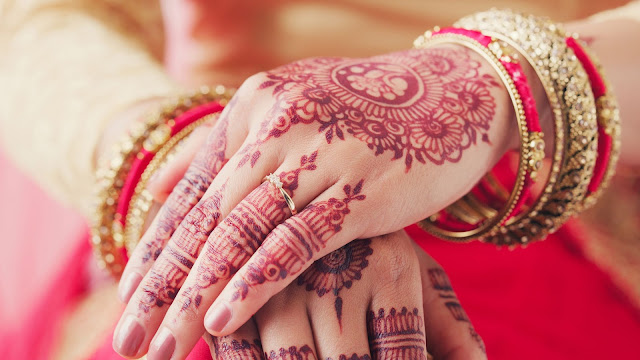 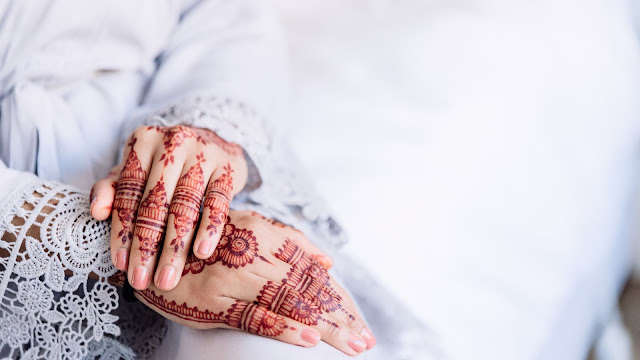 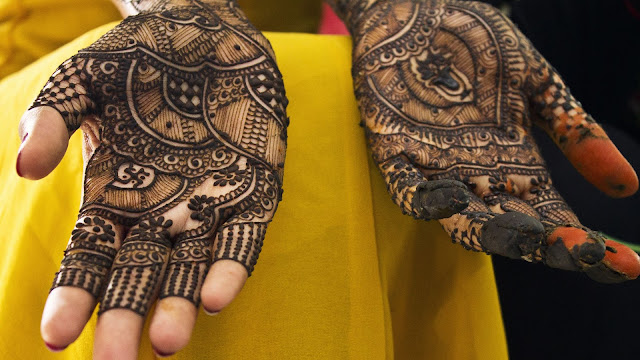 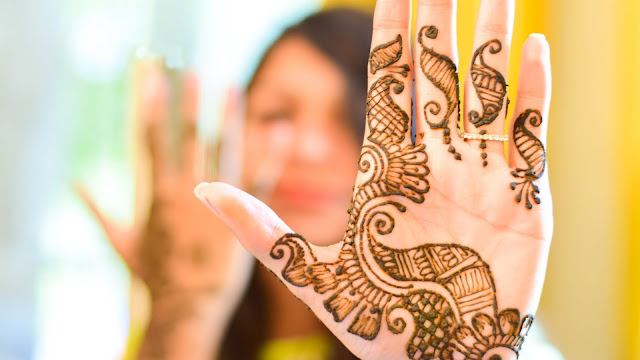 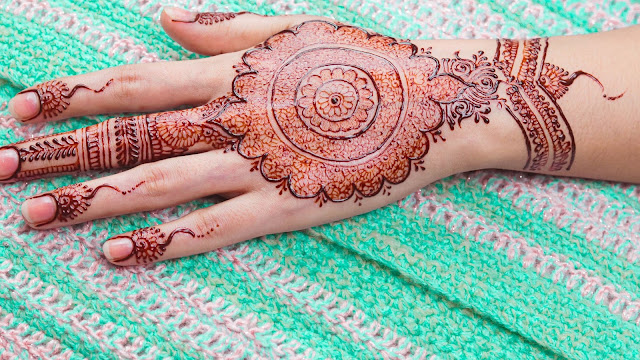 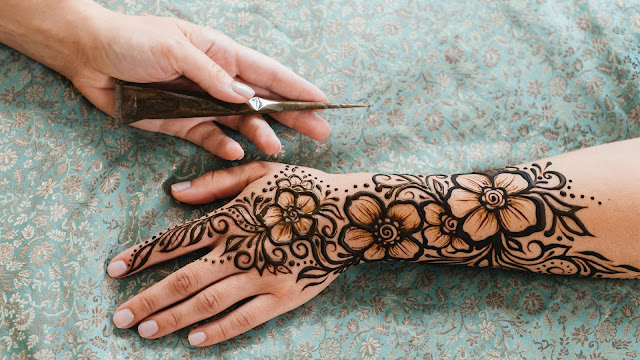 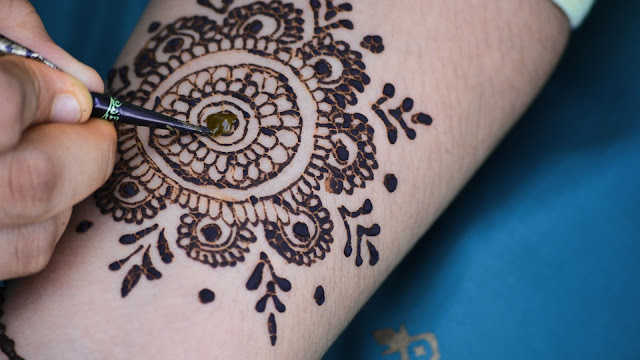 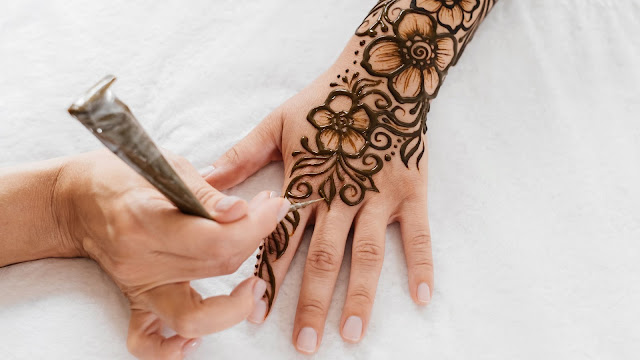 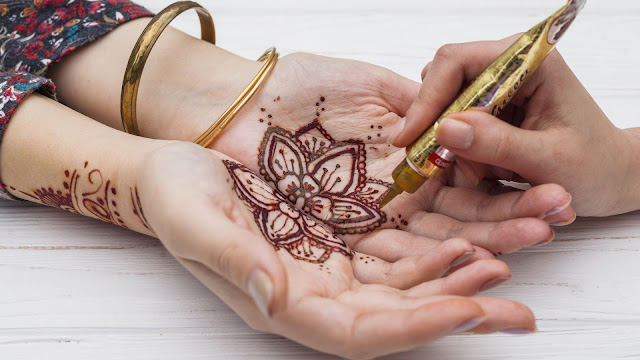 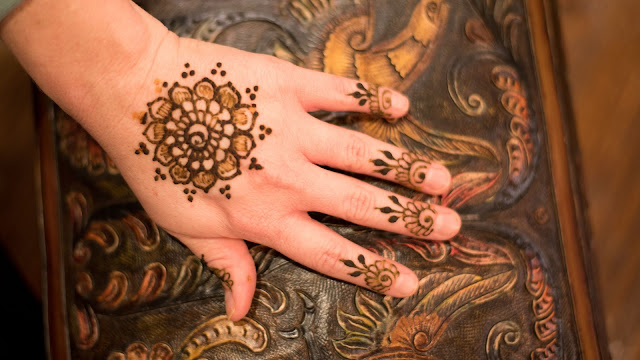 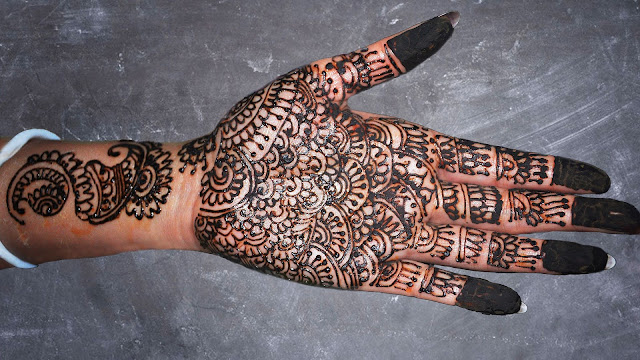 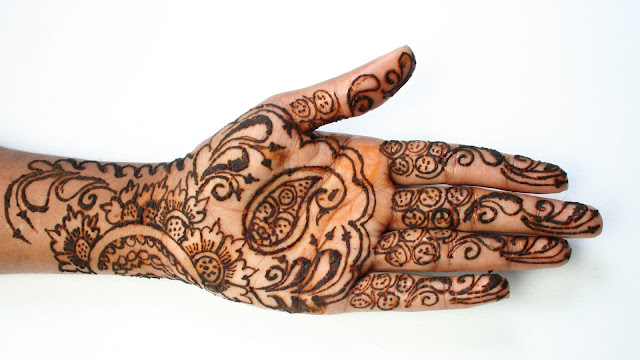 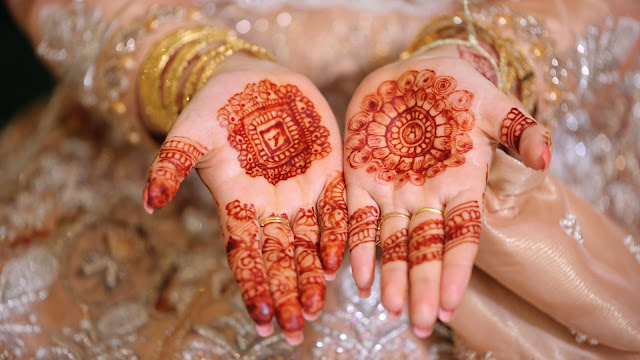 The habit of utilizing creative mehndi designs has reached out to westerners as well as Indians moving over the globe, they are bringing their beautiful culture with them. You can have it done at any moment to improve your bridal appearance. So theses are all about mehndi captions and mehndi hashtag for instagram.